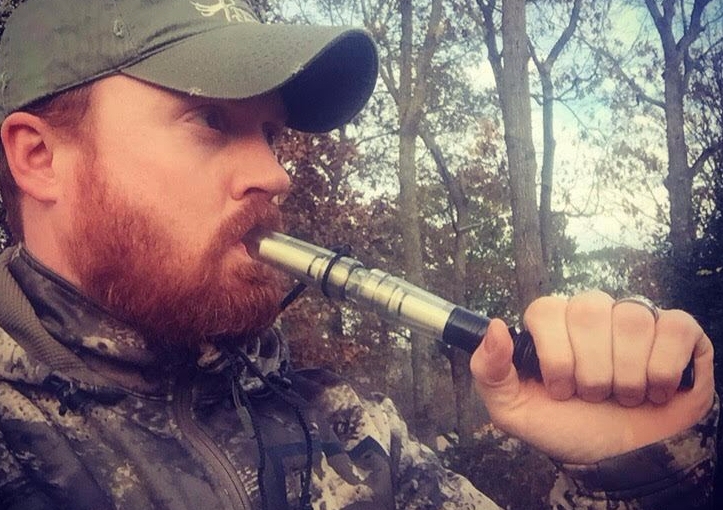 Just a few days ago, I was hunting in a great spot and had what many hunters have likely experienced—a big buck came within view, but he was cruising for does, and headed away from my position. He was walking along a creek-bottom nearly 100 yards from my stand, and getting further away with each passing second.

The deer was making his way through some thick underbrush, which blocked my opportunity for a good shot.

Desperate to draw the buck back into range, I grabbed a doe bleat can from my pocket and hit the call. The bucks’ ears perked up, but his legs continued to move. Frustrated, I waited a few seconds and again sounded the bleat. The deer was having none of it, and trailed off into the brush.

As my heart raced, and my hands begin to tremble in excitement, I searched in the direction where I last got a glimpse of the buck, but saw no sign of his return. Weighing my options, I reached for a grunt call, hoping to stir him into investigating another male suitor in his turf. After sounding a few grunts, I waited…

We’ve all probably experienced something like this while hunting. It’s the peak of the rut here in Georgia, and bucks are “cruising” around, looking for does. These bucks are moving at all hours of the day and night, and bagging a monster buck is most likely to happen when he’s lovestruck and casting caution aside to find a mate.

I consulted with my father, Keith Karr, who is one of the most knowledgeable hunters I know, and asked for some tips on stopping a cruising buck if I have a similar encounter in the future. My Dad has killed more bucks than I’ve ever seen, and has accumulated a wealth of experience and wisdom over the years related to whitetail deer hunting.

Here are some key methods he pointed out that can be used to get a cruising buck to stop in its tracks, and—if you’re lucky—draw him back into shooting range.

First, let’s define what a “cruising” buck is. A buck is considered cruising when looking for a doe in heat during the rut. These cruisers are moving at a good enough clip that you’ll completely miss the opportunity for a shot if you’re not prepared.

These bucks will be moving faster than usual, and not interested in stopping to smell the roses. He won’t be in a flat-out run, but more of a trot.

“I’ve learned over the years of a few methods that can stop a buck and present you with a shot, but I’ve also found that sometimes these methods work, and other times they won’t,” Dad says.

“Assuming a buck is close enough to hear a bleat call, that’s the first thing I would do,” he says. “Sometimes you might not have a chance to reach and grab an actual bleat call, so I’ve actually just made a similar noise with my mouth and stopped a buck in its tracks.”

A cruising buck is already searching high and low for does in heat, so a bleat call could make him think you’re the answer to his prayers.A buck will need to be within about 100 yards to really have a chance to hear a bleat, especially if he’s moving along at a fast rate.

Sometimes you won’t have a chance to grab a bleat call. Dad said a simple “baa” sound (similar to a sheep) is usually close enough to the real thing to get a buck’s attention.

Whether using a bleat call, or trying to mimic the sound with your mouth, be sure not call too loud, as you might actually startle some bucks.

It’s important to practice these calls before your hunt to ensure you can properly execute the sound you want when the time comes. There are loads of videos online that offer instructions on deer calls, so be sure to do your research.

“Second, if I can’t bleat, or if the bleat call doesn’t stop him, I would grunt,” says Dad. “If you don’t have a call handy, you can also make this call with your mouth. You’ll want to make an “oink” sound, just like you would if you were snorting like a pig. It might sound different to you, but a buck on the move won’t really be able to tell the difference in this and using an actual grunt call.”

Grunting should only be used when the deer is headed in another direction and you’re looking to get him to stop, or draw him back toward you.

In the experience mentioned above, after giving careful thought to the events, I realized that I may not have grunted loud enough for this buck to hear.

Be sure to consult with fellow hunters, or simply watch some videos online to get a better understanding of how to properly execute an effective grunt call.

Hunters will tell you that all bucks are different. Many have reported hearing a monster buck having a wheezy, nasal grunt while some younger, and smaller bucks sound like a blue-ribbon hog grunting.

A grunt call can be one of the most useful tools in a hunter’s arsenal if used correctly.

Remember, the closer the buck is, the softer the grunt should be. Grunting too loudly at a buck within 75 yards is likely to spook them.

When grunting at a cruising buck, be sure to keep it short and sweet, but don’t be shy with it either.

“Third, if a bleat or grunt won’t stop the buck, I would give a good, sharp whistle,” says Dad. “This is not something you might ever think to do to get a buck to stop, but the sound of a human whistling is a good way to stop a buck—especially if he is within range.”

A buck might be so zoned-in that grunts and bleats won’t phase him. But, a well-timed whistle is something that can often get his attention.

If All Else Fails, Yell

“If nothing else has worked at stopping the deer, I’ve made sort of a last-ditch effort, and yelled at a buck to get him to stop,” says Dad. “This is just a short, but loud verbal command like “hey” or “whoa” that is sure to get a buck’s attention.”

When using this method, Dad says there is one important point to cover.

“Be ready to pull the trigger,” he says. “Ninety percent of the time, this is sure to stop a buck, but you’ll only get a few seconds before he either runs, or continues on his path. Be ready for him to stop on a dime.”

Dad recalls using this method once, and missing a prime opportunity on a nice buck.

“I was sitting on a really pretty oak ridge when I heard a deer trotting toward me,” says Dad. “I looked, and it was a really nice 8-point buck coming right by my stand. I got up and grabbed my bow in time to draw back, but the buck was already very close to my stand. I yelled at him, and managed to get him to stop and present me a shot, but I made one mistake—I didn’t have my hand anchored in, and my sights weren’t lined up. Just that little bit of movement after he stopped was enough to spook the buck. He ran off, and I missed a good opportunity.”

You might use all four of these methods to no avail. Sometimes—especially in the rut—a buck is so crazed that nothing will stop him. But, if you do encounter a cruising buck, be sure to keep these methods in mind.

You might just get a shot that could be the difference in a wall-hanger and just another hunting story.

Donny is a writer from Carrollton, Georgia. His work has been published in magazines, newspapers, and many websites. As an avid outdoorsman, Donny enjoys writing about his adventures afield and on the water. He is a contributing writer for Georgia Outdoor News, and is co-founder of Man Can Outdoors. Donny is also a columnist for 1788 Sports, and co-founder of College Nation Tailgate Time where he covers college football. View all posts by Donny Karr